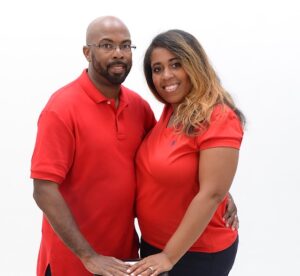 My name is Keane Tillman.  I am 42 years old and reside in Sanford, Florida where I have lived my entire life.  I am currently a registered pharmacy technician for AllianceRx Walgreens-Prime Therapeutic Specialty Pharmacy.  I have been married to my wife, Octavia Mott-Tillman for 6 ½ years and we have been together for eight years.  The book my wife and I are putting together is about marriage and what goes into keeping a marriage together; for marriage is a beautiful thing and should be an incredible experience, but it is a process that goes along the two people that have made a vow before God to become married and stay together.  As for myself, I grew up with my mom who was a single mother and older brother.  Though my father was in my life, he was married and had a family with my stepmother and three other siblings while my wife lived in the house with both parents who were blessed to be married for over 40 years before my father-in-law transitioned with the Lord in 2016 (My father transitioned in 2011).  We basically want to use our marriage as a tool (through this book) to be a blessing to someone else’s marriage.  Even though Octavia and I are far from perfect, we know that we are perfect for each other which is only possible by putting God first in our marriage along with the love/commitment we have for each other.

Octavia Tillman is from Orlando, Fl.  She grew up with parents that were high school sweethearts that stayed married for over 40 years until the unexpected passing of her father.  So, it was always her desire to get married and start a family right after graduating from college. That is how she planned out her life but life does not always go as planned. She eventually married and found herself divorced at the age of 30. Seven years later God restored the years with a new marriage. Octavia believes one of the keys that contributes to a successful marriage is preventive maintenance. Since the beginning of her marriage, she and her husband have attended marriage workshops, couple outings and retreats. Having these tools in place has assisted in overcoming some of the challenges that come with communicating effectively, learning how different men and women are and it’s not just you. She believes this has played a vital role in the success of their marriage. Her desire is to bring hope after divorce and to let people know it’s possible to have a successful marriage after a failed first one. Marriage doesn’t have to be hard if you are with the right person.

Connect with The Tilmans Online